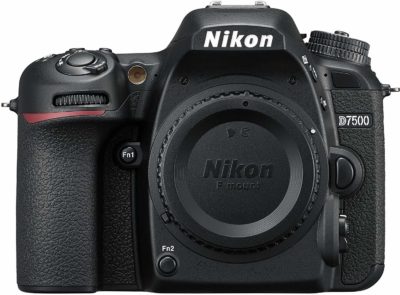 This camera is the closest thing you are going to get to the more advanced APS-C DSLRs but at a fraction of the price. It is designed to offer a balance between high-end performance and many-sided features at a fantastic price tag. For this reason this is going to be a very popular camera for new photographers and seasoned professionals. The new Nikon D7500 DSLR camera could be the camera you have always been looking for. 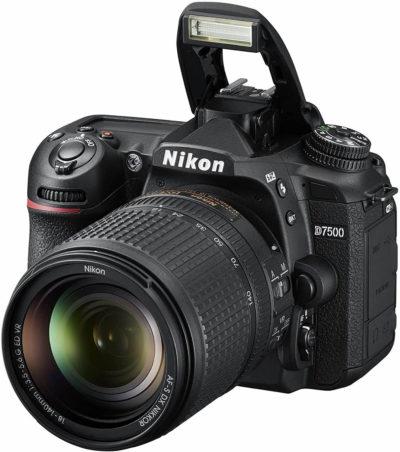 Despite the non surprising 20 MP sensor this Dslr impress for speed, low-light performance and overall image quality. So the continuous shooting speed is 8fps, not so far to the10fps of top mirrorless cameras making it good to capture most high-speed action. The buffer size is unusually good with a capacity of 50 raw files, something rare outside of the professional market. Typical DSLR or mirrorless camera users are more than happy shooting the standard JPEGs, but keen photographers prefer to shoot raw, even using the continuous mode, due to this the D7500 is way ahead of its competitors. The video capture quality is the amazing 4K UHD, something a little more common in mirrorless cameras but this is the first feature in a non-professional DSLR camera.

Nikon has featured the same ISO setting that they use in the more expensive D500 with a level of 1,640,000. The quality takes a noticeable plummet as the maximum standard ISO value is 51,200 but this is a strong indication of the technological advantages Nikon has included in the D7500. Nikon has improved its 51-point Multi-Cam 3500 II autofocus sensor rather than using the latest 153-point autofocus system that is used in the more expensive D500. This improved system that is featured in the D7500 has an Auto AF Fine Tune feature and a group area AF mode that is usually only found in Nikon’s professional range of cameras.

Nikon’s D7500 surprisingly does not accept a battery grip, it’s touchscreen tilts up and down making some capture angles easier to achieve. The resolution of the screen is a little lower than some of its current rivals at 922k dots. It comes as a surprise that there is only 1 SD card slot available with other cameras in the Nikon range having 2. The layout of the camera uses Nikon’s ‘Enthusiast’ controls with a drive dial combines with a mode dial for easy use.

Aesthetically the D7500 looks great with a carbon-fiber body chosen rather than a metal alloy, making it feel very sturdy. The camera is weather-sealed and has a tilting display screen on the back and features Nikon’s radio-controlled Advanced Creative Lighting System for the first time in a Nikon DSLR camera.

The Lack of an SD card slot and space for a battery grip is a little upsetting. The SD card could be fine on its own but it is just shame that models on either side of the range both feature the added slot. The lack of a battery grip is a. bit of a surprise, the D7500 does have a good charge life and it isn’t much of a problem to hold spares in your pockets but the addition of a grip can also improve the handling when a long lens is fitted and also makes it easier to use the camera for long portrait shoots, or even vertically. 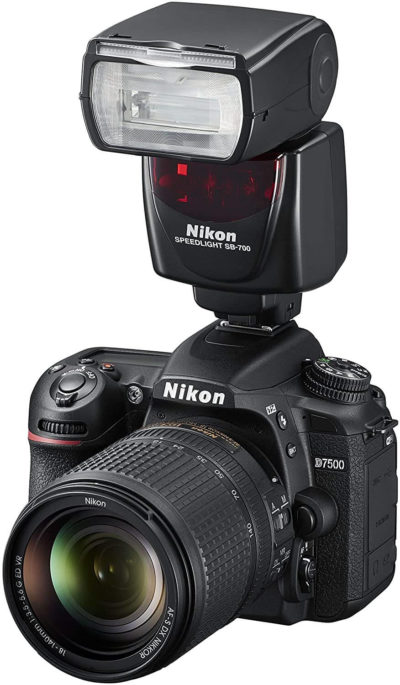 Nikon’s D7500 has a chunky, weighty body not as large as the pro-DSLR’s that are available but is definitely an advance on the entry-level cameras in the same category. The front of the camera features a deep grip giving you a strong, firm hold of the camera, there is room for buttons in the back with the extra height given to the body, even with the large tilting display screen that is included in the design. To adjust the angle of the screen simply pull out the bottom, an extended hinge moves the screen away from the body of the camera so that there isn’t any chance of blocking the viewfinder eyecup. For overhead shots, the screen also tilts downwards. On the back of the camera towards the base is the live viewfinder button inside a lever that switches between still shots and videos.

The D7500 has to rely solely on the contrast autofocus when in Live View as it doesn’t feature the hybrid AF system. The contrast autofocus is precise but slower than the hybrid version, but regardless the Nikon D7500 still feels faster and more responsive than its predecessor due to the Expeed 5 processor which provides more power. Like the older model the control layout is the same, the top left has the made dial which is on top of a release mode dial. Settings can’t be changed accidentally which is a bonus due to the dexterity needed when pressing down the locking button for the release mode dial.

Switching between manual and AF is easy with the lever on the front of the camera on the left side of the lens flange. To change the autofocus mode and focus area holds down a button in the center using the front and rear command dials. New users may find this button layout a little strange but will make sense after a few uses of the camera. There is an LCD panel on the top of the camera which is useful for making these kinds of setting changes, but they are also avilable on the rear screen. the use of the LCD is great when shooting in dark conditions or when using a tripod. 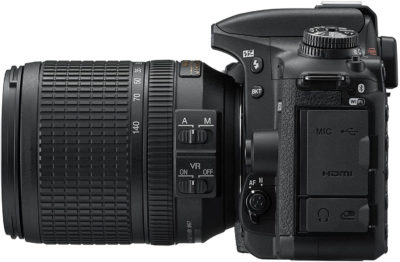 The dynamic range of all Nikon cameras is a strong selling point, but with the D7500 the dynamic range is exceptional, even in the lesser quality of using JPEG files. Color rendition is also a strong feature, the Nikon camera produced natural-looking, rich colors with the automatic white balance working amazingly alongside it. The fine detail remains very crisp even though the sensor is a 20.9 megapixels.

The button layout in all DSLRs from Nikon may seem illogical to users who are new to this brand so it could take a bit of time before full fluidity is achieved. There should be no problem with photographers who have used any other DSLR cameras in the Nikon range being almost instinctive. The menu system has the same problem, especially when using custom settings. Most of the settings in the D7500 can be used without customizing anything so it is not a compulsory task to wrap your head around. In fact cameras like this one can be customized but they need a lot of time with the manual to figure out how to take advantage of everything that is available. 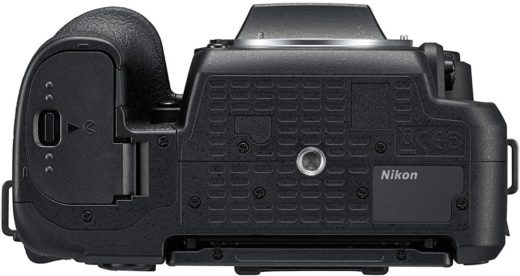 This camera has High-quality materials, even though it doesn’t have the same alloy construction that is found on the more expensive D500, the 7500 still feels solid and easy to grip mainly due to its rounded corners and surface materials. It is most likely to have the Nikon 18-140mm lens as standard for the kit lens although it is available as a body-only purchase, and a lot of retailers may combine the bodies with a different lens they feel suits better.

The 18-140mm lens has a good zoom range compared to the average kit lens you get, not weighting too much and still having amazing optical performances particularly if you switch the in-camera lens correction but this only works with JPEG files.

Just as found in other Nikon DSLRs recently this digital camera comes with Nikon’s Snapbride technology allowing you to transfer pictures wirelessly and use the remote control system. This system uses Bluetooth LE always-on connection that transfers 2mp versions of your photos automatically to your phone or tablet on the free SnapBridge app from Nikon. This Bluetooth connection can remotely activate the Wi-Fi connection when needed to offer remote camera control and full image size transfers. If you are using Apple products then you will still need to authorize the Wi-Fi connection manually as the security system does not allow this auto service. Sometimes the photos won’t appear on your device straight away, but the fact that there isn’t any need for wired connectivity or disc transfer is a massive bonus. 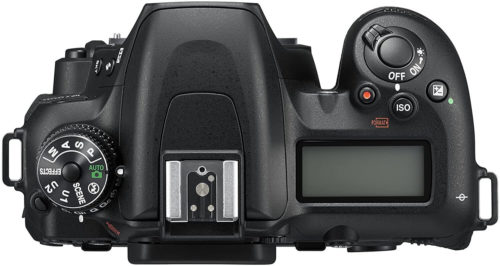 There are 2 main selling points for the processing technology and sensor that Nikon has recently produced, sensitivity and speed which the D7500 has in abundance. The continuous shooting speed is only 8fps which is a little lower than that on Nikon’s D500 but is definitely fast enough for most users. The high buffer capacity is great, coping with the extended raw shooting which helps with shooting burst photos but is also great for auto-exposure bracketing for HDR, an example is if you want to shoot bursts of 3 or 5 raw files.

The Matrix metering produces reliable exposure across a range of conditions and it is easy to apply small amounts of exposure compensation when shooting trickier subjects. The new highlight-weighted metering mode adjusts exposure in the brightest parts of the image you are recording without clipping, but this can sometimes leave mid-tones and shadows pretty dark. When shooting raw files it is possible to recover these darker areas making this seem to be a really useful feature. The auto white balance is equally as good preserving natural color from outdoor shots too high effect also coping really well under the influence of artificial light, although there are still some signs of yellow cast in case of old tungsten lighting. In full the colors are vibrant, rich, and realistic. with lots of different modes available for different outcomes such as the standard picture control, Portrait, Landscape, and Vivid control. 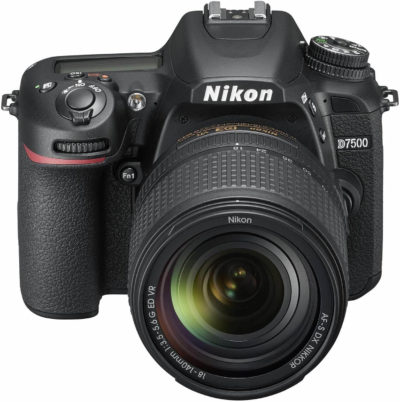 Compared to the D7200 the fine detail rendition of the D7500 did slightly lag, although it wasn’t by much and the results were good. It is probably only noticeable when the two cameras are side by side but the sensor of Nikon’s D7500 is still very good and has a lot of commendable qualities. The ISO level is higher than seen before in a camera of this specification, but the image quality takes a real hit when in those higher ranges of 1,640,000. However, quality is on the other end of the spectrum with its standard ISO range, produces amazing results with the overall color saturation, contrast, and impression of clarity all being excellent, there are some losses of detail and smoothing of fine textures at ISO 51, 200 but this isn’t that unusual at this level.

The drop of megapixel from the older 24-megapixel sensor to the new 20MP version will be a bit of a surprise to many people. It has a small impact on the overall resolution but the low-light performance, speed, and overall image quality are still at the top end.

When Nikon first released this DSLR camera it seemed as if it was going to be a standard range-filling model between the D7200 and the D500, but as time has gone on rival DSLR cameras have disappeared and the price of the D7500 has dropped putting in a strong position in the market for DLR enthusiasts. The only way you can get a convincingly better APS-C DSLR is by paying a lot more money this makes the D7500 a strong contender against other cameras in its category.